How do alcohol taxes work as a prevention strategy?

The Guide to Community Preventive Services developed the following analytic model for describing how this prevention strategy works:1 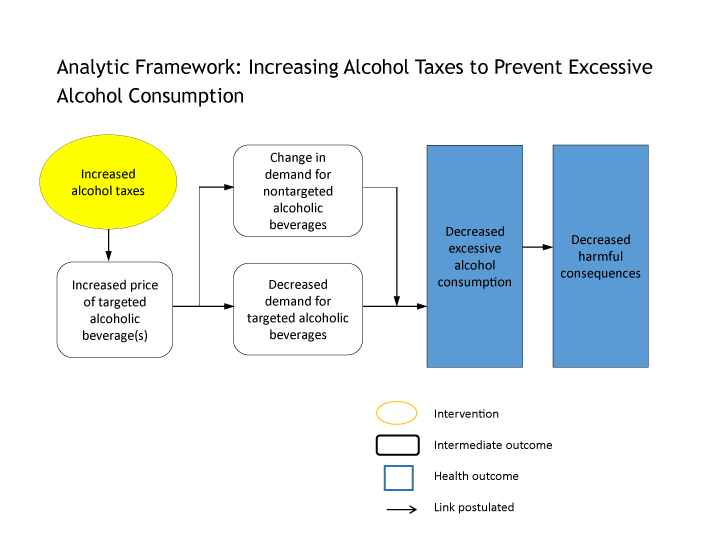 As described in the model, alcohol taxes are an effective policy strategy for reducing alcohol-related problems. When alcohol taxes are increased, the increase is generally passed on to the consumer in the form of higher retail prices for the taxed beverages.1 This price increase leads to decreased demand for the taxed beverages, which in turn leads to decreased excessive alcohol consumption and, as a result, to fewer alcohol-related problems.

The Community Guide also reviewed the effect of price increases on excessive alcohol consumption, including binge drinking, and concluded:

Cook (2007) also reviewed the research evidence and concluded that a $.10 tax increase per ounce of ethanol would reduce the likelihood of binge drinking by 30 percent for men and 28 percent for women.5

What effect does an increase in alcohol taxes have on alcohol prices?

There is only limited evidence of the extent of the pass-through from the alcohol manufacturer to the consumer (wholesaler to retailer to consumer if it is a wholesale tax, and retailer to consumer if it is a retail tax); however, research shows that increases in alcohol taxes usually result in higher retail prices.6,7 In fact, taxes are often result in a price increase that is larger than the amount of the tax itself.6,7 Research studies estimating the future effect of alcohol tax increases generally assume a one-to-one ratio (i.e., the tax increase is passed through to consumers with no additional increase).6 Therefore, studies that model the effects of alcohol tax increases are likely to conservatively estimate their effects.

What effect does an increase in alcohol taxes have on alcohol-related problems?

Twenty-two of the studies in The Community Guide review included assessments of the effect of alcohol price or tax increases on health outcomes, mostly addressing motor vehicle crashes, violence, and liver cirrhosis. The review concluded that higher alcohol prices and taxes were significantly related to reductions in all three types of public health problems.1 For example, Cook estimated that a nickel-a-drink tax increase would lead motor vehicle fatalities to decline by 7 percent and mortality from liver cirrhosis by 32 percent.5 The magnitude of the effect on cirrhosis mortality illustrates that alcohol tax increases can affect even the heaviest of drinkers, who are the most vulnerable to liver cirrhosis.

Similarly, another recent study pooled the findings of 50 research studies, and concluded:

“The aggregated results from this fairly large set of studies showed clearly that beverage alcohol prices and taxes were significantly and inversely related to all outcome categories examined: alcohol-related morbidity and mortality, violence, traffic crash fatalities and drunk driving, rates of STDs and risky sexual behavior, other drug use, and crime, with the sole exception that the estimated inverse relation with suicide was not statistically significant.”8

If underage youth get most of their alcohol from other people, not from commercial sellers, what effect does an increase in alcohol taxes have on underage drinking?

Increases in alcohol taxes affect drinking among all segments of the population, including youth.5 Available evidence suggests that the effects will be even greater on youth drinking than on adult drinking.10,11 The Community Guide summarized the available empirical evidence as follows:

“Of the nine studies that assessed the relationship between alcohol price or taxes and drinking prevalence among young people, six consistently indicated that higher prices or taxes were associated with a lower prevalence of youth drinking (four with one or more significant fındings). … The three remaining studies reported mixed results across different analyses, with the majority of their effect estimates indicating an inverse relationship between tax or price and drinking observed in the studies above.”1

Aren’t excessive drinkers going to drink even if the price of alcohol increases?

If taxes are raised for only one type of alcohol (e.g., beer), won’t drinkers just switch to other types of alcohol?

Research to date does not provide sufficient information on whether increasing taxes on one type of alcoholic beverage (e.g., distilled spirits) leads drinkers to switch to another beverage type (e.g., beer or wine). One study with beverage-specific information assessed an alcohol sales tax increase in Maryland (though the tax studied was applied to all beverage types).19 The study found that the alcohol sales tax had a smaller overall effect on beer and wine consumption, which may have been partially due to a shift in sales of spirits to sales of beer and wine.19 It is important to remember that consumer demand responds to a wide variety of factors, including availability. For example, in most states, beer is more readily available than distilled spirits. Thus, a tax increase on beer may result in less substitution than a tax increase on distilled spirits.

If we make alcohol more expensive, won’t youth switch to other drugs, such as marijuana?

Empirical research has not substantiated the assumption that young people habitually substitute one drug for another. In fact, historically, marijuana smoking among youth has increased when alcohol becomes more readily available and decreased when alcohol becomes more difficult to obtain.5,20 Though some substitution is possible, research suggests that increasing alcohol prices will result in a net reduction in alcohol and other drug use among young people.20