Commercial host (dram shop) liability laws hold an alcohol retailer responsible when a third party is injured or harmed (e.g., a death resulting from an alcohol-related car crash) by a patron to whom the retailer illegally served or sold alcohol (because the patron was visibly intoxicated or underage).1 In states where commercial host liability policies are in place, the injured third party can file a lawsuit in court to recover damages both from the patron who caused the injury and from the retailer who illegally served or sold alcohol to the patron. In states that have adopted this policy, both on-premises (e.g., bars and restaurants) and off-premises (e.g., liquor stores and grocery stores) establishments may be held liable, depending on state law.

How does commercial host liability work as a prevention strategy? Why would permitting lawsuits against alcohol retailers who illegally serve underage persons or intoxicated adults reduce excessive alcohol use and alcohol-related problems?

The Guide to Community Preventive Services (The Community Guide) developed the following analytic model for describing how this prevention strategy works4: 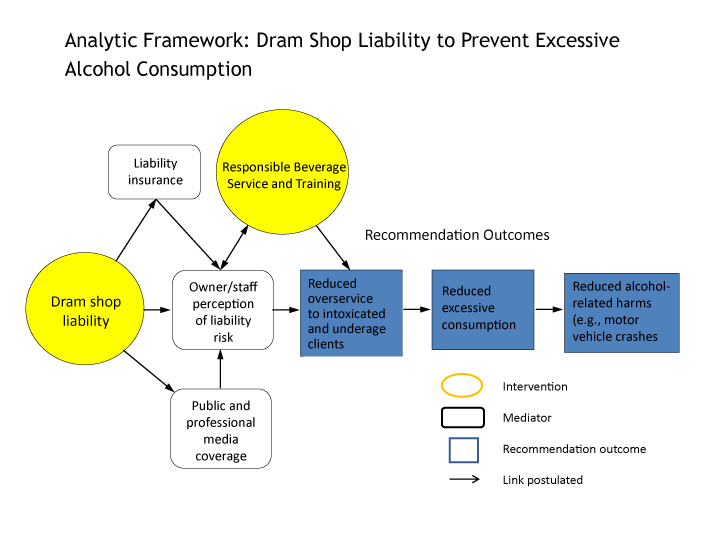 As described in the model, commercial host liability is an effective deterrence strategy for reducing alcohol-related problems. In states with a commercial host liability policy, retailers who illegally sell or serve alcohol to underage persons or visibly intoxicated adults risk lawsuits that may harm or even force the closure of their businesses. The retailers’ perception of the litigation risk increases the likelihood that retailers will implement preventive strategies to reduce illegal service, such as by adopting Responsible Beverage Service (RBS) policies and training. Preventive actions by retailers reduce excessive drinking, which in turn reduces adverse public health outcomes. Publicity regarding the existence and risk of lawsuits can increase the policy’s effectiveness by increasing retailers’ perception of risk; liability insurance may mediate the effect by decreasing the perceived risk of financial harm.4

Research has found that laws prohibiting alcoholic sales to intoxicated persons (SIP laws) have very low compliance rates.5 When considered in conjunction with the research discussed here, this suggests that a strong commercial host liability law combined with targeted publicity could enhance the laws’ deterrent effect and significantly reduce excessive alcohol use and related problems.6

Research suggests that on-premises establishments are important locations for programs addressing public health harms associated with excessive alcohol use (i.e., binge drinking, heavy drinking, any drinking by those under the minimum legal drinking age, and any drinking by pregnant women). One recent study surveyed more than 14,000 adults over a two-year period.7 Among those reporting binge drinking, 54.3 percent reported that they drink at bars, clubs, or restaurants, 35.7 percent consume in a home, and 10 percent reported another location. Of those reporting drinking at a bar, club, or restaurant, 25.7 percent reported that they consume ten or more drinks before getting behind the wheel. The researchers concluded that, among U.S. adults who report binge drinking, drinking in bars and restaurants (as opposed to in private residences) is strongly associated with alcohol-impaired driving.

Place of last drink studies support this conclusion. Using a variety of research methods, studies have found that at least 40 percent of people arrested or convicted for driving under the influence have their last drink prior to their arrest at on-premises establishments (e.g., bars and restaurants).8,9 Data are not available on the extent to which off-premises retail establishments illegally sell alcohol to visibly intoxicated adults.

Underage drinking is less associated with retail alcohol establishments. According to federal government studies, 11.5 percent of drinkers ages 18 to 20 report on-premises retail establishments as their place of last drink.10 Younger drinkers are much less likely to report such drinking locations (1.1 percent for those ages 12 to 14 and 3.4 percent for those ages 15 to 17). On-premises retail establishments are more often the place of last drink for female current alcohol users ages 12 to 20 than they are for male alcohol users (10.8 percent versus 6.9 percent).10

How is commercial host liability enacted? What do the terms “statutory liability” and “common law liability” refer to?

State courts are not consistent in their exercise of common law authority; many have recognized commercial host liability, but others have deferred to their state legislature and refrain from adopting it.

Common law and statutory liability may exist concurrently within a state, giving injured third parties two options for seeking damages from the alcohol retailer, with differing evidentiary requirements. More commonly, legislatures replace the court-adopted common law liability with their own statutory liability provisions so that only one form of liability exists in the state.3

What does the term “dram shop” refer to?

A dram is a small liquid measure (.125 ounces) sometimes used to measure out a serving of alcohol. In the 19th century, people sometimes referred to drinking establishments as “dram shops” because they served distilled spirits using dram measures. Temperance advocacy groups grew concerned about dram shops, arguing that they profited from habitually intoxicated persons to the detriment of family life. They supported the adoption of the first commercial host liability laws, referred to at that time as “dram shop liability,” during the mid-19th century.3 Many of the early laws focused on requiring dram shops to pay for the loss of support experienced by families of habitually intoxicated persons regularly served in the drinking establishments.11 The dram shop terminology continues to be used in the legal profession. The synonymous term “commercial host liability” is commonly used in the field of public health and is used here.